Conscious of this growing threat of counterfeit Havana cigars, Hunters & Frankau, Habanos S.A’s official UK Havana importers, introduced a special security stamp as long ago as 1993. Bearing the symbol of a lion on top of the letters EMS, which stand for English Market Selection, a description used in Cuba for over a century to identify the quality of cigars designated for the British market. It is the cornerstone of the UK’s long established reputation as the world centre for the finest Havana cigars. Each Stamp is individually numbered so that the history of every box can be traced. Since 1997, the stamp’s colour has been changed annually in the autumn as a further move to outwit the counterfeiters.Remember, wherever you buy your cigars look for the security stamp unless you want to risk the disappointment experienced by Clive James in his recent documentary. He bought a box of Montecristo’s off the street in Havana. The price was very competitive but the cigars were fakes and went straight into the bin.

One of the basic rules of Roman law was caveat emptor – that is to say, let the buyer beware. For more than thirty years there has been nothing easier than buying counterfeit Rolex watches, Channel perfumes and Hermes scarves. The latest sport in counterfeiting and stealing from unsuspecting buyers is in the field of cigars, many producers in the Dominican Republic now specialising in producing cigars that they call Cohibas but that have nothing in common whatever with the superb cigars of that brand name from Cuba. As has been pointed out on the Internet and in many magazines, phony Cohiba cigars can be found almost everywhere, and without actually smoking them it is becoming increasingly difficult to identify the fakes.

First, it is important to know that genuine Cohibas come in two series – the Classic line that include their Lancero, Coronas Especial and Robusto cigars and the Silgo series of Siglo I, II, III, IV and V. Both styles are available in boxes made of cedar wood, and all of the genuine Cohiba boxes contain 25 cigars. If you should find a box of Cohibas sold in white, paper wrapped boxes avoid them, for even though genuine Cohibas were wrapped that way 15 years ago, the Cuban company no longer uses such wrappings. When checking the boxes, be sure first of all that it contains a Habanos tax seal and that the seal has been perfectly set at a 45 degree angle. While Cuban bureaucrats are meticulous about this, the counterfeiters are careless.

Be aware that Lancero and Coronos Especial cigars are also available in orange and blue printed cardboard cartons. Inside each carton are 5 cigars, each of which is in its own individual box an individually wrapped in cellophane. Check each individual box and make sure that the Cohiba name is printed near the top of the box and that the name is printed without error some counterfeiters are not very careful with their spelling. Some even print the label upside down. Even more important, open the individual box of the cigars and you will notice that the cellophane of genuine Cohibas is stained a light brown. These stains come from the oil in the leaf of tobacco with which the cigar has been wrapped.

Only aged cigars leave such stains and all real Cohibas are aged. Also note that the cellophane is only about 1 centimetres longer than the cigar itself and that the cigars are perfectly wrapped. Some of the counterfeits have cellophane wrappers that are from 2 – 4 cm. longer than the cigars. Also note that the inside of each individual box is printed with the word Cohiba. (Alas, the best fakes have this too).

The second major thing to check is the label. Although some of the counterfeit labels are printed perfectly, most are faulted and easy to spot. The main thing to look at are the black and white squares on the label of the box and on the individual cigars. The squares on real Cohibas are perfectly even and without fault, but those on the counterfeits are often sloppily done and have rough edges. Another important test is to look at the cap of the cigar. The men who put on the tobacco that caps a genuine Cohiba are artists and the caps of genuine Cohibas are without faults. The caps of the counterfeits are often wrinkled, have a somewhat “off” colour and are sometimes not at all tight fitting. As to flavour, aroma, and the pleasure of the cigar, there is a problem,   because if you are smoking a counterfeit you have probably already paid for the box. Genuine Cohibas are extraordinarily rich, tend to be full bodied, draw comfortably and have full flavours of tobacco, cedar wood, chocolate, coffee, spices and herbs.

The counterfeits, on the other hand, are mediocre cigars at best, tending to draw either too hard or too easily, far too hot as they smoke, and lacking any finesse at all. The counterfeits can be bought at remarkably reasonable prices. Alas, comparing them to genuine Cohiba cigars is akin to comparing the wines of Romanee-Conti to those made on the Greek island of Samos. If you have never tasted a Samos wine, consider yourself fortunate.

Nor is it only Cohibas that are counterfeited and in recent months the production of counterfeit Havana cigars of a dozen or more Cuban brands has become so common that unless one buys from only the most reliable dealers, there is an ever increasing risk of spending a great deal of money for cigars that are virtually worthless. Perhaps the very best way to reduce that risk is to become familiar with both genuine and counterfeit wrappers that are used, and there is no better way to do that than by viewing the excellent photographic gallery of genuine and fake labels presented by the American magazine, Cigar Aficionado. The gallery can be viewed on the Internet at Cigar Aficionado.

Find out more about the new Habanos Authenticity Check. 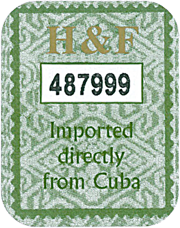